Pei was born and raised in southern China. After college, she traveled to the United States and earned a Ph.D. in Biochemistry and Molecular Genetics from the University of Alabama at Birmingham. She worked as a Post-doc and Research Scientist at Yale University in New Haven, Connecticut for seven years. She taught as a professor at Liberty University in Lynchburg, Virginia for the last five years. She will be moving to Baltimore in August. She is currently looking for a job in Baltimore. We greatly appreciate your prayers for Pei to get a job. In her spare time, Pei enjoys hiking and playing tennis and racquetball.

Jacob was born in Indonesia and completed his higher education abroad. He earned his bachelor’s degree in Foreign Languages and Literature at Tunghai University in Taichung, Taiwan. He then traveled to Louisiana to pursue his MBA at Southeastern Louisiana University. There, God revealed to him the need to reach international students with the gospel, and he has served in international campus ministry since. While in Louisiana, he earned master’s degree through online education in Christian Leadership at Liberty Theological Seminary in Lynchburg, Virginia. After nine years serving international campus ministry in Louisiana, Jacob worked for nine years as the Director of Briarwood International Outreach at Briarwood Presbyterian Church in Birmingham, Alabama. During his time there, he completed his M. Div. at Birmingham Theological Seminary and was ordained as a minister in the Presbyterian Church of America. He moved to Baltimore, Maryland in July 2018 to plant RUF International campus ministry at Johns Hopkins University. In his spare time, Jacob enjoys photography, hiking, and kayaking.

Do you feel like reading a resume? We feel that too :)
These are the things that our friends have been asking--Where is he/she from? What does he/she do? What is his/her specialty? Well ... now you know :) Let's move on, shall we? 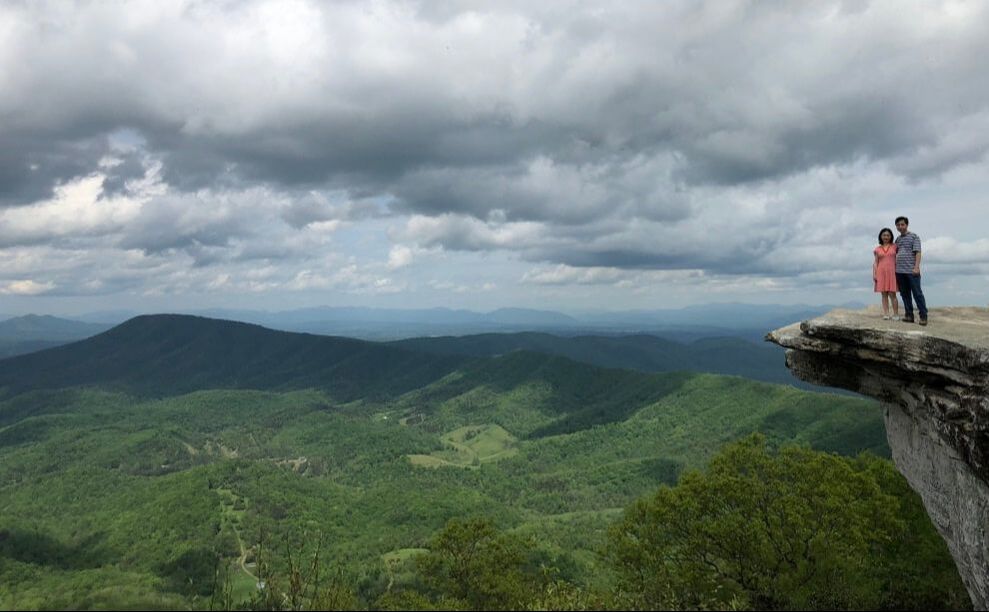 We were at McAfee Knob, a good hiking trail in Virgina .... about 8 miles round trip. Our legs were sore after hiking :)
About our wedding ...

We will have a small and simple wedding, since most of our friends live in other cities.

Parking: You can park at the parking lot of Faith Christian Fellowship Church or on the street outside the church.

Out-of-town friends: information about some hotels and sight-seeing places in Baltimore will be emailed to you by the end of August.

Wedding Registry: we are registered at:
Amazon.com -- click here
​Registry will be updated by the end of August :)
Reformed University Fellowship (RUF) International
Welcoming and meeting the needs of international students and scholars in Baltimore